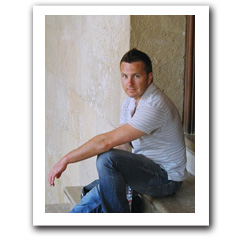 The different tourism jobs I’ve had in London allowed me to travel around the world but never to New Zealand, and that was a place that I always wanted to go.
But after 10 years in England, I met a Kiwi who insisted that I come to the land of the "All Blacks".

Before I joined the working world of New Zealanders, it was inconceivable not to visit the country, so we left in a campervan to discover New Zealand. Travel by campervan was not really to my taste at first. I found it cumbersome, not very "cool", and to be honest I was a little apprehensive to drive such a vehicle.

My misgivings on the subject weren’t listened to and the decision was made and we rented a campervan that slept two people. After choosing the worst rental company with the worst campervan (obsolete, no hot water, no operational information...) and a chaotic start when I scraped the roof from a tree in front of my house, I spent the best holiday of my life.

All my preconceptions about campervans fell to the wayside after the holiday:

But after more than a month on the roads of Aotearoa, looking for a job was paramount.
After several positions in tourism, which led me to know the major players in this industry, I met Gregory. Thanks to this passion for New Zealand and our experiences of campervan travel we decide to create DetourNZ to help travellers find the right vehicle, at the right price and to provide all the necessary information to make an educated choice.

DetourNZ now occupies most of my time. I still try to go away regularly by campervan for mountain biking. It’s a luxury to park by the roadside, go for a walk and then have an on-site shower, fridge for a well-deserved beer and barbecued sausages.